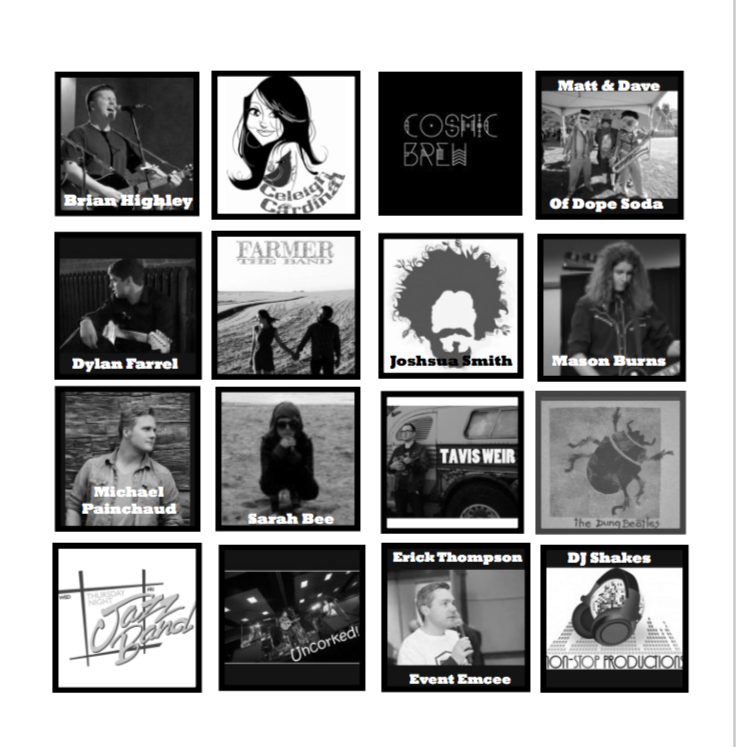 Entertainment at the 2016 Fest of Ale includes a great mix of performances on both the main stage and at busking locations inside the venue and on the outdoor tasting deck. It’s an eclectic mix of talented performers with a diversity of styles – a great compliment to the diversity and range of styles of brews being offered at the event. Check out the line up and look and listen for them at 2016 Fest of Ale.

Cosmic Brew – Formed in 2014 the band Cosmic Brew was has positioned itself as one of the premier rock bands in the valley. Mason Burns leads the charge of this dynamic group with his â€œJimmy Pageâ€ like guitar riffs and as lead singer his strong clear voice sets the stage for an always exciting and energetic performance. Kris Marsel is one of the most energetic bass guitar players ever, and between Kris and Mason there is a dynamic synergy that keeps the audience enthralled. Not to be forgotten is the methodical beat of drummer Josh Visser, who’s precision supplies a solid yet varied backdrop to some great rhythms and lead runs. With great interpretations of all the classics and an amazing set of original music,Cosmic Brew has developed a very loyal fan base and have filled every venue they have performed at.

Dave & Matt from Dope Soda – The pre-eminent horn playin’ hosers on the BC craft beer scene! Nanaimo’s Dave St. Jean and Matt Carter, annual performers at the Great Canadian Beer Festival and Nanaimo Beer Festival, are stoked to bring their funky warped jazz trombone and baritone saxophone duets to FOA for the first time. Their chaos flows from their usual roles as co-frontmen for ska-rock outfit Dope Soda, an IPA-fueled highlight at Van Isle music festivals and 2015 recipient of “Song of the Year” at the Vancouver Island Music Awards. Let beer and hilarity ensue.

Dylan Farrell – Dylan Farrell is a born and bred musician from New Brunswick. His soft and expressive voice is equally matched by his powerful guitar playing in his blues inspired pop tunes. Dylan started playing professionally at the age 15, and has been playing actively on the atlantic coast until his move to Alberta in 2012. Since then he has established himself by playing throughout the Alberta area and most recently representing Northern Alberta at the 2015 International Blues Challenge in Memphis, Tennessee where he competed against acts from all over the world. While in Memphis, Dylan started recording his debut album at the legendary Sun Studios.

FARMER THE BAND: FARMER THE BAND is a multitasking, multi-instrumentalist BC based duo. They folk up the rock. They blues up the twang. They indie up the roots. They “alt” the country!

Joshua Smith – East Coast-Soul-Folk. What one could suggest as being a Soul-inspired, captivating experience, Joshua is a singer/songwriter who mingles catchy clever lines and infectious vocals in the company of playful story telling. With a nod to Motown, Joshua Smith captures tradition and folk-friendly modernism with his songwriting prowess. New album coming October 2015.

Mason Burns – Mason Burns lives to perform, and he earned his chops busking at The Penticton Market scene over the last 10 years (starting at 10 years old) polishing his craft and entertaining the thousands of people who attend each year. Currently the front man and lead guitar player for Penticton rock band Cosmic Brew, Mason still loves the intimacy of performing solo for small and large groups. As a solo act, Mason plays acoustic versions of classic folk, rock and original music and he truly takes his audience back to another time when life was maybe a bit simpler and music meant something with its grace and lyrics. Mason’s singing style is definitely his own, but is reminiscent of Marc Bolan,Robert Plant and Jim Morrison.

Michael Painchaud – Michael Painchaud is a country music singer/songwriter currently based in the Okanagan. After singing and playing guitar for much of his life, he began writing his own material in March of 2014, placing in the top 5 during that year’s Lake Country singer/songwriter contest. Since then, he has performed throughout British Columbia and Alberta, including the Calgary Stampede after being voted one of the top 25 emerging artists by the British Columbia Country Music Association in 2015. Michael has recorded an album (to be released in May 2016).

Sarah Bee – Sarah Bee is a local Penticton artist who has been swooning and rockin’ crowds since she was young. Accompanied by Allen Pelletier on the cajon, she plays her ukulele and sings original, heartfelt songs that are sure to captivate you and make your ears feel satisfied.

Tavis Weir – Tavis weir is an indie folk jazz musician and composer based in the Okanagan valley. His songs are heavily inspired by nature and the Canadian landscape. Tavis has a degree in jazz guitar, but possesses a song-writing capability that cannot be taught. His expansive guitar playing and simple poetry transform the walls of a room into trees, seascapes and mountain ranges in the mind of the listener.

The Dungbeatles – The Dungbeatles play a funny, quirky mix of roots, pop and world music. The band plays it fast and funny for all our Fine Young Fannibals. We are all about music, dancing and laughter. And beer! The DB’s are based out of the Garaj Mahal Rehearsal Palace and Recording Laboratory in sunny Kamloops BC.

Website: Thursday Night Jazz Band
Uncorked!– Uncorked! is one of the South Okanagan’s favourite dance bands performing to a wide variety of audiences. , Uncorked! features the talents of Lisa Salting on bass and igniting the stage with her lead vocals, Jeff Queen on acoustic guitar, vocals and blues harmonica, Sean Queen on lead guitar, bass and vocals, with Gary Leggott rounding out the rhythm on percussion. When Uncorked! takes the stage, you will find it hard not to get up and dance to the Rhythm and Blues and Acoustic Rock from Fleetwood Mac, Van Morrison, Elle King, Avicii, Bruce Springsteen, The Eagles, Steve Miller Band, Bob Seger, Eric Clapton, Bob Marley, Steppenwolf, The Rolling Stones, Jack Johnson, Florence and the Machine and many more.

DJ Shakes from Non-Stop Productions – DJ Shakes and the team at Non-Stop productions provide stellar entertainment for all types of parties and all age groups. Specializing in weddings, parties, grads, corporate events, and clubs, Non-Stop Productions offers interactive DJs armed with a massive song library, an excellent knowledge of numerous genres of music, and the keen sense to read a crowd.

Event Emcee – Erick Thompson – Erick Thompson is the co-owner of ET2media, a communications company specializing in video production. Erick is also a professional emcee and moderator, president of the Summerland Chamber of Commerce, and chair of the Summerland Skate Park Committee. Prior to co-founding ET2media, Erick spent more than 20 years in television, film and radio