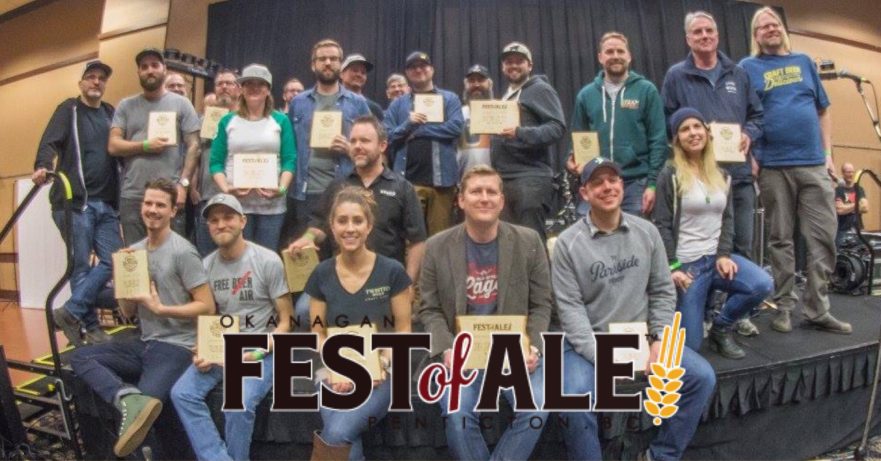 The weather didn’t dampen the spirits of craft beer and cider enthusiasts who flowed into Penticton over the weekend for the 22nd Annual Okanagan Fest of Ale. Organizers of the event are calling this one of the most successful events to date.

65 craft brewers were on hand this weekend to showcase over 175 craft beers and ciders to over 5,000 guests. “This is by far the largest collection of breweries and cideries that we’ve hosted and one of the best turnouts we’ve had,” says John Cruickshank, Okanagan Fest of Ale Society President. “We are fortunate to attract some of the best brewers to the event and patrons with a keen interest in craft beers and ciders. That combination had a really positive impact on the overall atmosphere at the event. The energy was great. Guests had a fabulous time enjoying the selection of beverages, culinary options and live entertainment.”

The difficult job of determining top honours for the awards fell upon a panel of 9 industry experts including Joe Wiebe (Craft Beer Revolution), Mike Garson (Mike’s Craft Beer), Jan Zeschky (Brewed Awakening), Jason van Rassel (The Daily Beer), Jeremy Nemanishen (CraftBeerVancouver.ca), Rob Mangelsdorf (The Growler), Wade Dhooge (Cask & Barrel), Chelsea McDowell (BrewtifulBC.ca), and Rebecca Whyman, (Beernesday.com).
“We were thrilled to once again have such an esteemed panel of judges here with us at the festival,” says Warren Everton, Okanagan Fest of Ale Judging Chair. “They had a difficult job tasting and evaluating 121 different beers and ciders to determine the best entries in 12 different categories and then to agree on the overall Best in Show award. In addition, the People’s Choice Awards were voted for by attendees of the festival. These awards include Best Beer, Cider, and Food.

Hand crafted awards created by local artisan Tim Tweed were distributed to the winners as listed below. Everton continued, “The winners represent an amazing collection of the best that BC has to offer. Make sure you visit your local liquor stores and restaurants to try these award winners. If you’re in Penticton, the Government Street Liquor Store & Wine Shoppe, that ran the onsite liquor store at the festival, features many of the beers and ciders that were showcased at the event.”

Craft themed events took place around town the week leading up to the event were also well received. A number of restaurants offered craft inspired menus throughout the week featuring local breweries and we were fortunate to have Joe Wiebe offer a seminar on the Thursday night before the main event. “The support from local businesses was fantastic and we are looking to build on the success of Okanagan Beer Week™ for next year”, says Cruickshank.

Cruickshank summarized, “On behalf of the Board of Directors of the Okanagan Fest of Ale Society, we would like to extend thanks to all vendors, sponsors, supporters, volunteers, entertainers, judges, media and attendees for making this event an incredible success year over year. Thanks to the great work from the team at the Penticton Trade and Convention Centre and to Erick Thompson from ET2media for being the MC for the event. We are also very thankful to Get Home Safe for their support, to our local taxi operators and to The Coconut Express for shuttling our guests home safely.”
Not only does the festival host a venue for beer enthusiasts, but it also generates money for local Penticton charities. In its twenty-one year history, the Okanagan Fest-of-Ale Society has gifted over $577,600 in net proceeds back to the community. 2017 Charitable grant applications will be made available online only June 1 – June 30. For more information on the Okanagan Fest of Ale, visit www.FestOfAle.ca or follow them on Facebook, Twitter and Instagram.