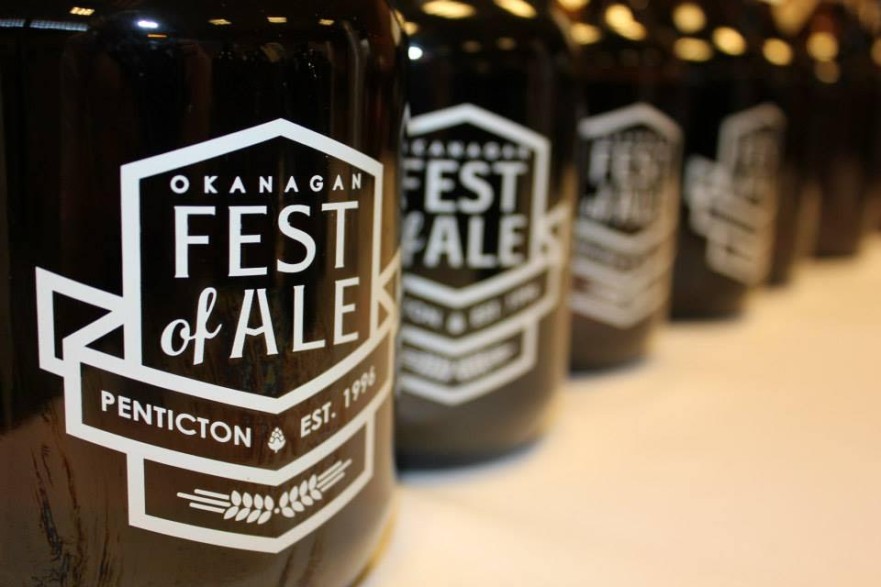 Whether you’re a seasoned craft beer connoisseur or a craft brew newcomer you’re certain to find something new, exciting and fresh at the 2016 Okanagan Fest of Ale.
The 21st annual Fest of Ale takes place in the waterfront city of Penticton BC April 8th & 9th, 2016. The 2-day event features great entertainment, fabulous food, and an opportunity for 5000+ beer and cider enthusiasts to sample a diverse and delicious selection of craft brews, cask ales and quality ciders from 55 exceptional craft breweries.
The 2016 roster of participating breweries includes favourites from nearly every corner of the province. Of the 55 participating, 15 are new to the event and many of these are new to the craft industry. 5 will be featuring craft cider and many will be offering new seasonal releases and brews created special for the occasion.
“We are thrilled to have lined up a record number of participants for the event and elated that 5 of these breweries call Penticton home” says, Fest of Ale Vice President and Marketing Director John Devitt. Best known for its orchards, lakes, and summertime fun, Penticton’s reputation as a craft beer destination is gaining ground. A new brewery will soon be opening its doors in the city bringing the total number of craft breweries in the city to 5. Penticton offers something for savvy cider drinkers too – with numerous craft cideries opening up throughout the region. “Consumer interest in craft brewed products continues to grow and the craft brew scene in Penticton is growing right along with it”.
In addition to sipping a selection of over 150+ suds and ciders guests of the fest can look forward to delicious dishes from 12 local restaurateurs, a number of which will be offering food and beer pairings. The choice of eats being offered at the event is as diverse as the array of brews with options from food truck favourites to fine fare from some of the areas most noteworthy restaurants.Entertainment at the Fest of Ale includes a great mix of performances on both the main stage and at busking locations inside the venue and on the outdoor tasting deck, while the on-site liquor store makes it possible for everyone to take their favourite festival memory home!
New to the festival is a 2-day weekend pass. Priced at only $47, a s a stand alone ticket the 2-day weekend pass is perfect for the those interested in sampling the wide variety of craft beer and cider available at the event in a responsible way at an affordable rate; and for those interested in a weekend get away is offered in conjunction with ticket and accommodation packages starting at just $109/couple. A 2-day tasting tour originating in the Lower Mainland is available also through a partnership with Vine & Hops.
“Ticket and accommodation package bookings to date have been brisk. We are over 30% ahead of last year on sales to date, so if you are planning to take in the Okanagan Fest of Ale this year we recommend purchasing your tickets soon” says Devitt.

Make plans to Sip & Savour and kick of the spring season with a nod to craft in the sudsy Okanagan.